How much COVID-19 risk is there in these common winter activities? by Heidi Atter
Tuesday December 29th, 2020 at 8:35 AM 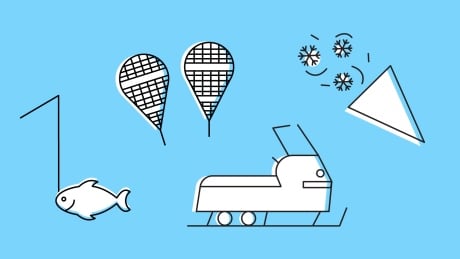 From snowshoeing to renting a cabin, here's some expert advice to consider.

It’s now the largest actively managed exchange traded of any variety, and its one of the best-performing ETFs this year, active or passive. The ARK Innovation ETF (ARKK ) didn’t get here by chance.

Between glimpses of a medical cure and winning science’s shiniest prize, this proved to the gene-editing technology’s biggest year yet.
Read the whole story

Seven High Frequency Indicators for the Economy by Calculated Risk (noreply@blogger.com)
Tuesday December 29th, 2020 at 8:12 AM

These indicators are mostly for travel and entertainment.    It will interesting to watch these sectors recover as the vaccine is distributed.
IMPORTANT: Be safe now - if all goes well, we could all be vaccinated by Q2 2021.
----- Airlines: Transportation Security Administration -----
The TSA is providing daily travel numbers. 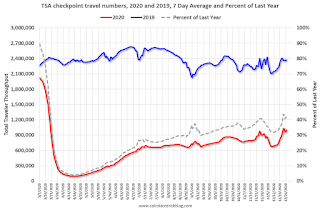 This data shows the seven day average of daily total traveler throughput from the TSA for 2019 (Blue) and 2020 (Red).

The dashed line is the percent of last year for the seven day average.

This data is as of December 27th.

There has been a slow increase from the bottom, with ups and downs due to the Thanksgiving and Christmas holidays.
----- Restaurants: OpenTable -----
The second graph shows the 7 day average of the year-over-year change in diners as tabulated by OpenTable for the US and several selected cities. 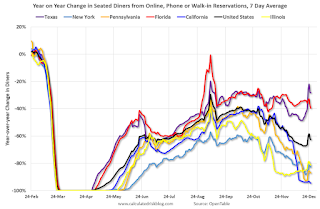 Thanks to OpenTable for providing this restaurant data:

This data is "a sample of restaurants on the OpenTable network across all channels: online reservations, phone reservations, and walk-ins. For year-over-year comparisons by day, we compare to the same day of the week from the same week in the previous year."

Note that this data is for "only the restaurants that have chosen to reopen in a given market". Since some restaurants have not reopened, the actual year-over-year decline is worse than shown.

Note that dining is generally lower in the northern states - Illinois, Pennsylvania, and New York. Note that California dining is off sharply with the orders to close. 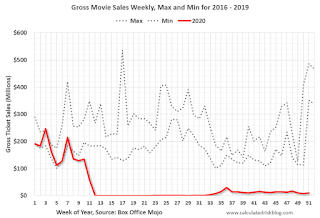 This data shows domestic box office for each week (red) and the maximum and minimum for the previous four years.  Data is from BoxOfficeMojo through December 24h.

Note that the data is usually noisy week-to-week and depends on when blockbusters are released.

Movie ticket sales have picked up slightly over the last couple of months, but were at $10 million (compared to usually around $400 million per week at this time of year).

Some movie theaters have reopened (probably with limited seating). 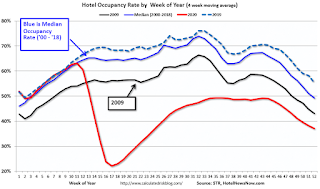 This graph shows the seasonal pattern for the hotel occupancy rate using the four week average.

This data is through December 19th. Hotel occupancy is currently down 26.4% year-over-year.


This suggests no improvement over the last three months. 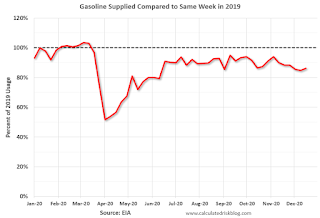 This graph, based on weekly data from the U.S. Energy Information Administration (EIA), shows gasoline supplied compared to the same week last year of .

At one point, gasoline supplied was off almost 50% YoY.

Note: People driving instead of flying might have boosted gasoline consumption over the summer.

----- Transit: Apple Mobility -----
This graph is from Apple mobility. From Apple: "This data is generated by counting the number of requests made to Apple Maps for directions in select countries/regions, sub-regions, and cities." This is just a general guide - people that regularly commute probably don't ask for directions.

There is also some great data on mobility from the Dallas Fed Mobility and Engagement Index. However the index is set "relative to its weekday-specific average over January–February", and is not seasonally adjusted, so we can't tell if an increase in mobility is due to recovery or just the normal increase in the Spring and Summer. 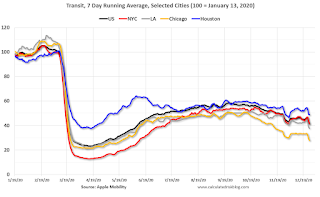 This data is through December 26th for the United States and several selected cities.

The graph is the running 7 day average to remove the impact of weekends.

IMPORTANT: All data is relative to January 13, 2020. This data is NOT Seasonally Adjusted. People walk and drive more when the weather is nice, so I'm just using the transit data.

According to the Apple data directions requests, public transit in the 7 day average for the US is at 41% of the January level. It is at 28% in Chicago, and 49% in Houston - and mostly trending down over the last few months (this dips on holidays like Thanksgiving and Christmas). 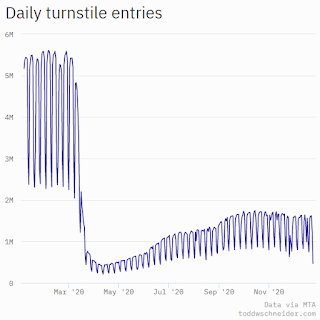 This graph is from Todd W Schneider. This is daily data for this year.

This data is through Friday, December 25th.

Schneider has graphs for each borough, and links to all the data sources.

How to Use: The below maps will animate automatically. To pause, move your cursor on the image. Arrows on left/right navigate. 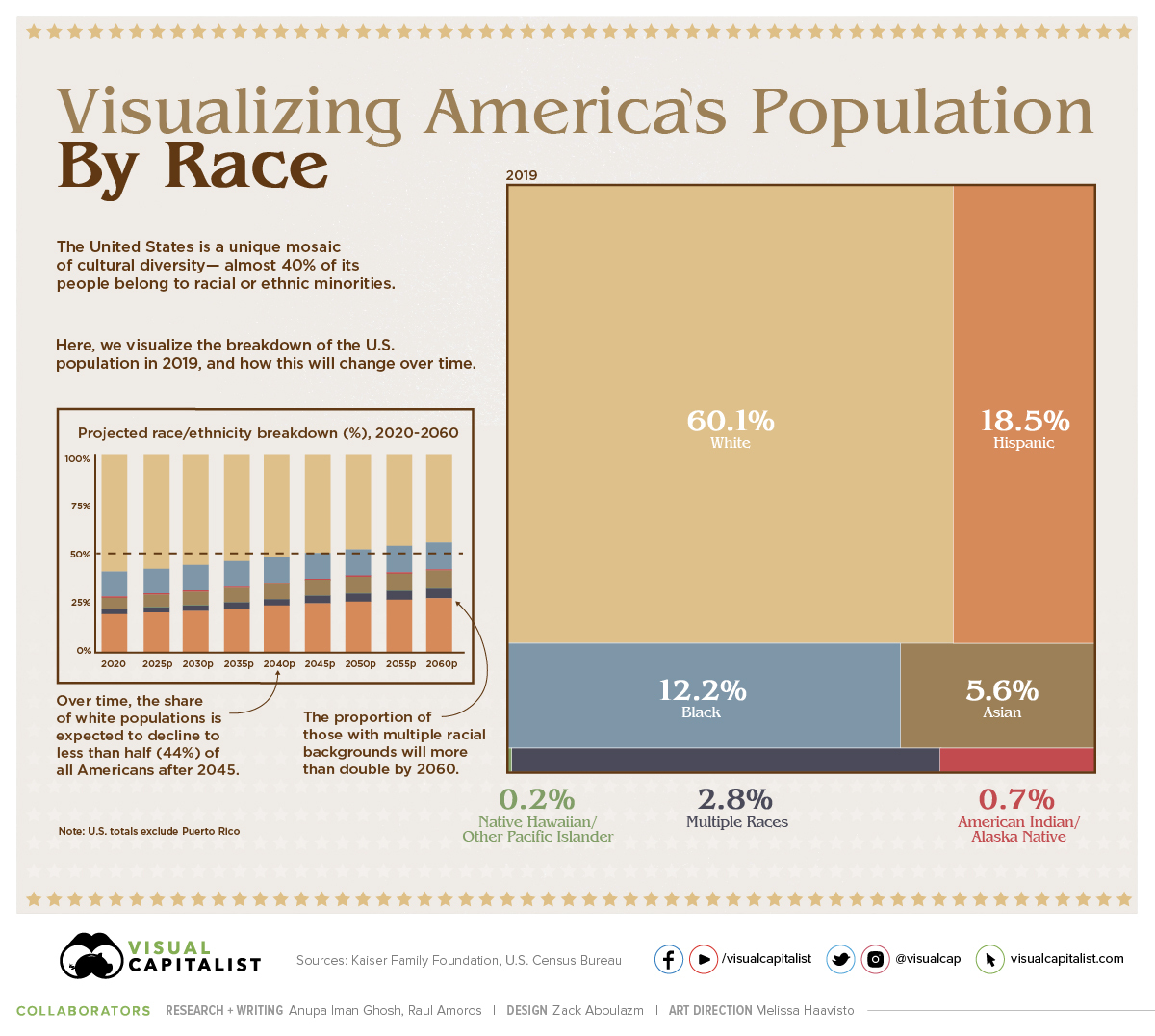 Visualizing the U.S. Population by Race

The American population is a unique mosaic of cultures—and almost 40% of people identify as racial or ethnic minorities today.

In this treemap, we use data for 2019 from the Kaiser Family Foundation, which bases its analysis on the latest American Community Survey (ACS) data from the U.S. Census Bureau. Then we break down the same data on a state-by-state basis.

As of 2019, here is the current distribution of the U.S. population by race:

*Note that the U.S. totals do not include Puerto Rico.

However, these race and ethnicity projections are expected to change over the coming years. By the year 2060, it’s expected that the distribution of Whites as a percentage of total population will fall from 60.1% to 44.3% of Americans.

Interestingly, the proportion of those from multiple racial and ethnic backgrounds will more than double, from 2.3% to 4.9% alongside rising patterns of interracial marriage.

Over time, the U.S. Census has been vastly expanded to reflect the true diversity that the country holds. In fact, it was only from 1960 onwards that people could select their own race—and only from 2020 can those who chose White or Black provide further information on their roots.

Of course, racial diversity in the United States differs widely from region to region.

In the Northeast—particularly the states Maine, Vermont, and New Hampshire—the White population accounts for 90% or more of the total. In contrast, Black populations are highest in the District of Columbia (45%) and several Southern states.

Note: A dash (-) indicates estimates with relative standard errors greater than 30%, which were not included in the data

Of all the 50 states, Hawaii is home to the largest share of Asian populations at 39%. It also has one of the most diverse racial breakdowns in the nation overall, including the highest proportion of mixed race individuals.

Looking to another island, an overwhelming majority (98%) of Puerto Ricans are of Hispanic origins. While it’s not a state, its inhabitants are all considered U.S. citizens.

Charting the U.S. population by race is crucial for a number of reasons. This information can be used to better understand existing income and wealth gaps, track public health outcomes, and to aid in policy decision-making at higher levels.

The post Visualizing the U.S. Population by Race appeared first on Visual Capitalist.

Obamacare Gets First Big Test as Safety Net. It’s Holding Up, for the Most Part. by Margot Sanger-Katz, Sarah Kliff and Quoctrung Bui
Tuesday December 29th, 2020 at 8:05 AM

Job losses and the loss of insurance have typically gone hand in hand. This year, more Americans are staying covered. 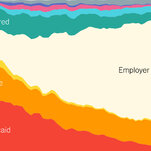